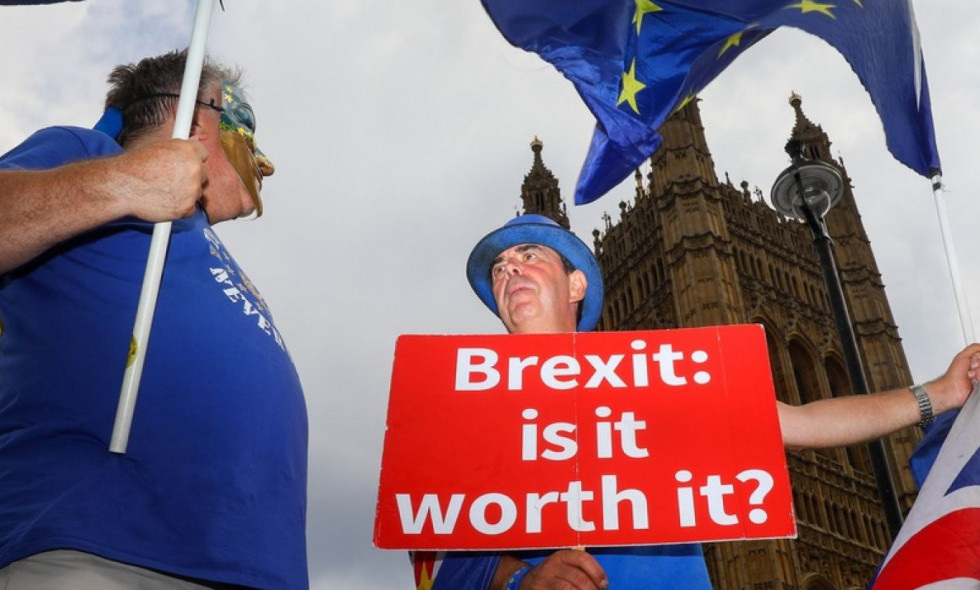 Kyiv: Teresa May – British Prime Minister, declaring that Brexit is 95% ready, is still asking for support from parliament. Very controversial, right? So, after all, Brexit is ready or not, Front News International figured out together with Dr. Aris Georgopoulos, an expert and lawyer in European and public law.

The official negotiations between London and Brussels under the terms of Brexit began on June 19, 2017. We should not forget that many political experts believe that the attempts of hard Brexit from May are futile. The terms of the deal, which Theresa May’s cabinet proposes to the European Union, strongly dislike many British politicians – both supporters of British withdrawal from the EU, and opponents.

Constant pleas of the country’s prime minister to support the “Checkers” plan, which is based on a “free trade agreement” with the European Union, are rejected, people in London go on demonstrations in order to prove that they are much better in the EU, they ask for a second referendum. It’s all against May.

About the attitudes of the British, the future of Britain, and what kind of readiness did 95% Front News International journalist talk with Dr. Aris Georgopoulos, an expert and lawyer in European and public law.

Front News International – Teresa May, October 22, reported that the Brexit agreement is 95% ready, adding that it was able to make significant progress on security and transport issues. Can this be considered true or is it just an empty word and bragging?

Aris Georgopoulos – The Prime Minister is now in a very difficult position. This difficult position is more connected with insurmountable differences within the conservative party than with the negotiating position of the EU. 95% is just a fictional figure. Even if she said that everything is 99% ready, everything was the same as with 95; the remaining percentage (5% or any figure) does not allow for a consensus with the EU, which will receive the support of the British Parliament. Of course, the unresolved issues concern the question of the border in Ireland. In solving the problem with the border in Ireland, no progress was recorded.

FNI – Also during the same statement, May asked cabinet members to support her exit plan from the European Union. What is the likelihood of a cabinet riot after she last minute called on ministers to support her?

A. G. – There are cabinet members who hold diametrically opposed positions about Brexit. But nevertheless,  It is not unlikely that there will be resignations if the Prime Minister accepts or presents a plan that involves a long transmission period where the UK actually remains within the internal market and the customs Union.

FNI – On October 20, there was a march against Brexit in London, where about half a million people gathered together. People demanded a second referendum in order to have at least a small opportunity to prevent an exit from the EU. How likely is the likelihood of a second referendum?

А. G. – In my opinion, the second referendum is inevitable. Even with a long transitional period, there comes a time when the UK should complete its newly acquired relations with the EU. All Brexit scenarios will eventually make the UK economy worse in the short or medium term. Given the fact that the referendum in 2016 became a festival of disinformation and often a clear lie, would make a second referendum, in which all possible decisions are on the table, necessary.

From the constitutional point of view, the holding of the next referendum is not required. Parliament alone could decide to remain in the Union. This is the essence of “parliamentary sovereignty,” which is the fundamental principle on which the British Constitution is based. However, politically it is difficult. The reason is that for the first time a system based on representative democracy (parliament) was imposed on the mechanisms of direct democracy (referendum) with the expectation and political commitment that the latter mechanism would be decisive.

FNI – Considering that there are a lot of people against Brexit, is it likely that in the case of the separation of Britain from the EU, Britain will be covered by the second wave of protests and what could be the consequences?

A.G. – Given the situation with the border in Ireland, the more likely scenarios are “hard Brexit”, which will immediately lead to serious economic consequences or will remain within the framework of the customs union and the internal market. If the first happens, people who believed that Brexit would be the solution to their difficult economic situation would suffer. Who knows what their reaction will be when they realize it. The second option can not happen without a second referendum.

While May is thinking about what option to exit the EU should choose: hard or soft, more than a million Britons have already signed a petition for holding another Brexit referendum.

Despite the fact that Britain may indeed have problems in terms of the economy and given the fact that after the financial crisis 10 years ago, the UK still managed to reduce the budget deficit, but the level of debt is still high, Finance Minister Philip Hammond recently assured that the Kingdom has enough reserves to support the country’s economy in case the UK faces the same, sensational hard Brexit.

But still, Hammond stressed that the deal with Brussels, which will allow continuing trade with neighbors from Europe, without significant problems at the borders, can minimize the negative impact of Brexit on the UK.

Formally, the end of the Brexit process is March 29, 2019, after the 29th, according to the plan, there should be a transition period that will last right up to the end of 2020. It seems that there is still time, but still, will the Minister manage to convince everyone on Checkers to prove their position and prevent protests by people who, at least, live in this country.